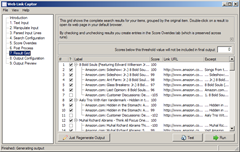 Web Link Captor will be a real time saver for any blogger or curator of information that has a large list they need to link to other sites.

It was inspired by my father's Desert Island Jazz Collection...about 700 tracks of what my dad feels is the all-time best of the best that jazz has to offer. Many people have asked him to publish this list on his blog, but the amount of work involved to look up every album and link it to Amazon, with an affiliate ID, is just too much work for him to consider doing.

With Web Link Captor, a task like this will be much faster and easier, with automatic formatting of the output in HTML, bbCode, or Wikipedia markdown, depending on where you want to paste the results.

But it doesn't just link to Amazon. It can link to Wikipedia and a host of other sites. You have full control over everything and can fine tune it to be exactly what you want.

Watch the video and see it in action:

So, if you have any enormous lists of value that you have hesitated publishing on the web because of the amount of work it would take to manually link each item somewhere that would enhance the list and make it much more interesting and useful, give Web Link Captor a shot.

It won't be officially released until January 1, 2012, but you can request an early fully functional beta version on the forum.

Web Link Captor was created by Jesse Reichler (aka mouser) for DonationCoder.com's New Apps for the New Year (NANY 2012) software celebration. Every year the community at DonationCoder holds an event where developers pledge to release a new freeware/donationware application by Jan 1. Most applications are pre-released to give the community time to test and offer feedback, and give the developers a chance to fix bugs, add requested features, and apply some final polishing before the official event date.

Whether you are a developer or just love software, you can be a part of this great community, too. And if you spot a DonationCoder application that you really like, we encourage you to support its development in any way that you can, through donations, testing, feedback, spreading the word, etc.