Good Faith is Not for Sale

I recently came across an article on the company blog of Backstage Technologies, written by Russ Ovans, their CEO.
Here is what he had to say:


We were recently in negotiations to be acquired. Talks lasted about five minutes, but during that time, the VP of Business Development from the prospective acquirer kept warning us not to divulge any of the ingredients in our "secret sauce", lest the deal fall apart (which it did) and we ended up suing them for stealing all our invaluable intellectual property (which hasn't happened... yet).
Every time he used the phrase (which was often) I found myself becoming more and more amused. What the heck is a secret sauce? I assumed he meant competitive edge, or intellectual property, but being a marketing type, he liked using that buzzword instead. Wikipedia tells me that it means any component of a product that is closely guarded from public disclosure for competitive advantage.
So, what is our secret sauce? Do we even have one? We certainly do, and the primary ingredient is the knowledge regarding how to design and build a social game (and its underlying virtual economy) that is both engaging and monetizes well. That certainly constitutes a fair portion of our secret sauce.
But our special sauce (i.e., our sauce that is not a secret to any of our competitors) is our commitment to customer service. Anyone can steal that, but it takes a huge commitment.

This is what makes certain applications and services a joy to use...that human touch by an approachable team.

Without that, your customers will drop you like a hot potato for the first clone that comes along that provides what you do, AND goes the extra mile by listening to them and being approachable.

That human touch makes the customer feel like they are part of the team. It is one of the reasons why services like Friendfeed and the applications from DonationCoder have been as enjoyable to use as they are.

Excellent customer service creates loyalty. Anyone that has made good customer service the corner stone of their business, no matter what line of business they are in, and is considering selling their company to another, should think about this long and hard before making that decision.

There is one thing you can not sell along with the company, and that is good faith. Your customers gave that to you because you earned it. If you sell out to another company that doesn't take customer service as seriously as you have, your customers will jump ship after the sale, and the company you sold out to will run what you have built into the ground.

It might not happen in a day, week, month, or year, but it will eventually happen. The customers will eventually take back that good faith and give it to someone else that deserves it.
Do you really want to see that happen to something you built, something you made such a commitment to, and put a lot of effort and hard work into? Do you want to end up having seller's regret somewhere down the line, wishing you had found a better buyer that would have done the right thing with what you created, by providing the same level of service that you did?

Before you sell out, make sure your prospective buyer is as serious and committed to customer service as you are. It will benefit you in the long run by allowing you to retain the good faith and loyalty you earned. Your former customers will be more likely to trust you in your next venture and be first in line to be your customers again, if they don't feel like they were somehow cheated in the sale.

Sell out to the wrong company and you will very likely be bad mouthed by the very people that once loved you, and they may never be willing to trust you again.
Posted by App at 6:02 AM 4 comments: 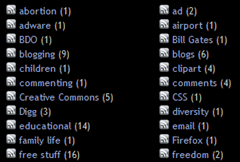 If you take a look at the bottom of this page, you will see that in my Labels section (I called it Categories) that each one has its own feed icon.

What is especially nice about having individual feeds for your labels is that it allows your readers to subscribe just to the content they are interested in most and nothing more.

It also allows each individual author of a multi-author blog to each have their own personal feed, if you tag the posts with the author’s name.

Adding RSS Feed Icons for Labels on Blogger
Posted by App at 1:41 AM No comments: