The Most Powerful of All Human Rights

The heroic photojournalist that is responsible for this incredible iconic photo
has been missing since Wednesday. He is believed to have been arrested.
UPDATE: He has been released!

There is one right that every human being on this planet has, that can only be taken away by death.

This one right, at it's most extreme, takes the most courage to exercise but can cause the biggest changes. It's powerful and those with power fear when people feel compelled to use it.

It is the right to say "No", a word that exists in every language and is usually among the first words a child learns to speak. It is a word more powerful than tanks, or guns, or bombs, and when combined with the voices of many others, shouting it in unison, it is possible to wage war and win, without ever striking or attacking with any other weapon.

Citizens of Iran, keep saying "No"!

Whatever it is that the government wants, keep saying "No", unless and until it is what YOU want.

You can and will win, as long as you keep saying "No".

Do not allow yourselves to be silenced.

A long time ago I created a set of buttons for use on my old art website, to number pages.

Back in those days, I was kind of careless and stupid concerning saving the original templates for my artwork. Instead I saved one blank button with a black background, to match that site, which means I can only use those buttons on sites with black backgrounds.

I really liked those buttons a lot, so I recreated them from scratch today, in much better quality than the originals. 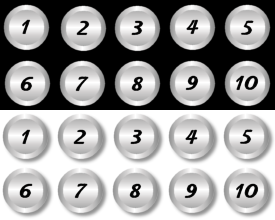 With transparent backgrounds, they can now be used on any color website. I also made a set with a slight drop shadow, so they would stand out more on lighter backgrounds.

Released under a Creative Commons 3.0 Attribution license, suitable for both personal and commercial use. Just give credit by linking back to this site on any page that you use them, or in your about box if you use them in a desktop application.

Besides using them to number pages, I think they would be great for numbering items in all those “Top 10” lists that so many bloggers seem to be fond of.

And in case you want to do a top 20 list, I have included .psp and .psd source files of both versions, so you can edit and make more buttons (or change the font).

Perfect for linking to your Twitter profile or any other purpose in which you’d need a bird icon.
In 16 assorted colors, so you can dare to be a little different and match the colors of your website. 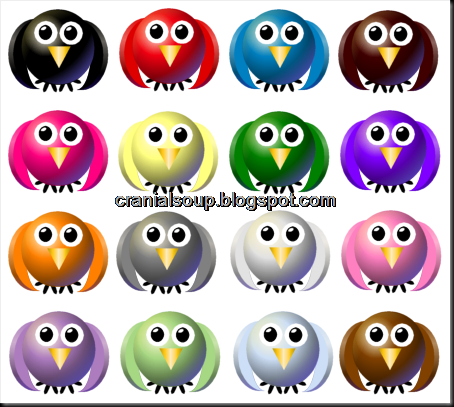 Also included in the full set, are the original Paintshop Pro vectors (.psp).

Released under a Creative Commons 3.0 Attribution license, suitable for both personal and commercial use. 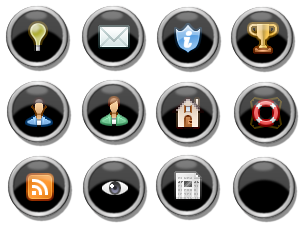 A set of 12 buttons in PSD, PNG (with and without shadow), and Paintshop Pro PSP and TUB formats. (They should work in any version of Paintshop Pro, v7 and newer.)

Set includes:
Icon images on the buttons were created by Yusuke Kamiyamane (from his Fugue Icons set). Chrome bezel buttons were made by me.

The entire button set is licensed under a Creative Commons Attribution 3.0 license and can be used free, for any personal or commercial projects.