A: I did not exclude curse words because that can differ based on region, era, and cultural background.

List of non-words with 4 letters can be found here.


Question found on Answerbag.com. Answer is mine.
Posted by App at 4:29 AM 1 comment:

On my last post, I was using the program wBloggar, and ran the spellcheck before posting.

Now, I really like wBloggar... I like it a lot. But the spellcheck feature definitely leaves something to be desired.

It found error with the word 'voicemail' and suggested this replacement: 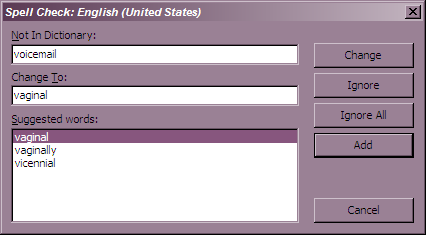 Now let's use that correction in a sentence, shall we?

"As soon as I got home I took off my coat and checked my vaginal messages."

Everyone should replace all instances of the word voicemail with vaginal from now on.

I have Joined the 21st Century!

That's right...I am finally living like a normal person...sort of.

I acquired a nice fast PC back in December 2005...taking the place of my old P1 as my main PC.

Now I have added to that...DSL!

OK, it's s-l-o-w DSL, but it's a hell of a lot faster than dialup and the fighting in my house over the PC with the dialup connection has ended. Now both my daughter & I can be online at the same time...and talk on the phone too. Not that I like phones any more than I did on Thursday, because I still hate phones of any type.

Which means I am taking my phone off the hook during the day so the people that would call me most can't get through and still have to leave me a 60 second voicemail.

So what did I do with my new DSL so far?

I went to neopets.com, one of the slowest sites I ever used, and loaded flash game after flash game...not to play them, just to watch them load. It was fun to see that progress meter just zip and the game to be loaded. A second or 2 is tons faster than the 10+ minutes it used to take.

I am hosting my own chatroom now...with WinMX...on primary!! YAY!!!

Port forwarding...I was feeling like a total n00b idiot on that subject...was getting very frustrated. If this happened to you, you might be frustrated too:

Seems like a candidate for The Daily WTF to me.

But I am loving DSL...really loving it!

But I have to go clean my house now, before it dies from neglect...then I can come back and abuse my DSL some more...maybe download some HUGE files today. :-)
Posted by App at 7:39 PM No comments: