You'd be amazed at the things you can fix with a toaster oven...

This is a guest post by a friend of mine that wishes to remain anonymous. His only desire is that this information is shared with the public and that more people can put it to use. I just baked BlackBerry Cobbler (a BB 9630). It came out perfect.

The phone took a dive into a sink full of water while its owner was doing dishes, and went unnoticed until the sink was drained. It was deader than a door nail when I received it.

I took it apart, rinsed it as clean as I could with tap water, and then with 97% rubbing alcohol. I let that evaporate and then placed the printed circuit boards in the toaster oven, on top of strategically-placed screwdriver bits so-as to space the board off the aluminum foil lining the oven tray. Then I set the oven for 180 F for about 20 minutes. I did not toast the battery in the oven for safety reasons.

Also I have baked laptop wifi and video cards, desktop pci cards, laptop motherboards, desktop motherboards and xbox consoles with the red ring of death (the larger items in a full size oven). Quite literally, if it's toasted anyhow, what does one have to lose other than 20 minutes? Sometimes items need their solder to be reflown, and this wet-phone-drying/toaster oven reflow soldering method honestly has saved both myself and those around me a ton of cash. Reflowing solder should be done at 230 F or so for about 20 minutes.

Plastic bits on the board? Plugs? Wires? No worries! Heck, part of the BlackBerry cobbler I baked tonight (the 9630, that is) was more than 60% plastic, and I didn't even bother removing the camera before baking it. I kept the temp about 180 F since a solder reflow was not required, but if a reflow might benefit the item I do not hesitate to turn it up to 230 F.

Never leave the oven unattended, not even for a moment, just in case plastic bits start to disfigure - but they shouldn't, as plastic typically melts at a higher temperature point than solder.

Don't bake the outer shell of the phone though - bare boards only.

Never bake a battery unless it is soldered onto the board, in which case go for a higher blast of heat for a shorter period (say, broil for 7 minutes).

Next time your phone hits the sink (one of my older BlackBerry phones took a 20 minute trip into the clothes washing machine) or your laptop video or wifi card dies (these are prone to overheating due to poor cooling, sometimes they can flex some, breaking solder joints in the process, and can benefit from a reflow), etc, pop the circuit board into the oven for a little bit. What's the worst that can happen? I've fixed newer HP laser printers I was literally given because they didn't work, simply by reflowing their main boards. $75 a pop at yard sales is a nice profit for me simply having put my toaster oven to work.

When you're done, do not budge the toaster oven until it has been off for at least 20 minutes. It would suck major donkey scholng to bump a board with molten solder and have an IC with a 500+ solder ball grid array slide just enough to short circuit things even worse than they were, when some patience to let the boards cool down adequately could have had the item fixed.

In this day and age, when things seem so disposable and inexpensive, so much waste gets created and is disposed of. It's a shame if that little toaster goes under-utilized and our broken disposable electronics aren't even considered for repair.

It should be noted I do not cook, thus my toaster oven is solely dedicated to the task of baking printed circuit boards. Tin and lead vapors/molecules in or on my food doesn't appeal much to me. Then again I prefer fast food, so...

Give it a baking in the toaster oven before you toss it, you may be pleasantly surprised at how perfect things come out. And you'll learn how stuff is assembled and disassembled in the process!

And for those of you that would like to use this information but need an inexpensive toaster oven, I found this one for you on Amazon:

One I did to someone else, the other was done to me...

One year, many years ago, the start of Daylight Savings Time began on April 1st. Before going to bed, my husband and I went through the house changing all the clocks. I waited for him to fall asleep and I pushed them all ahead an extra hour. He woke up that Sunday morning and rushed off to work, without ever realizing what I had done till he arrived at work and went to change the big clock on the wall.

Now what made this one of the best pranks ever is how for 3 days of every year, whenever Daylight Savings Time begins or ends, and on April 1, my husband goes into a time panic, thinking I am going to prank him like that again. He becomes such a wreck and I just laugh. I never have to prank him again. That one time was good enough to affect him for the rest of his life. 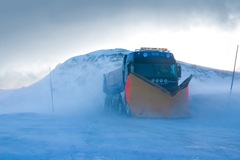 Now the one that got me wasn't really a prank at all. When I was back in high school, I received a phone call very early in the morning on April 1, from someone that was trying to tell me that school was canceled because of snow. Even though I was half asleep, I was quite aware of the date, and wished her a Happy April Fool's Day before I hung up. I ended up getting ready for school and going downstairs to leave, opening the front door to a vision of about 2 feet of snow. Yeah, the joke was on me, that phone call was for real.