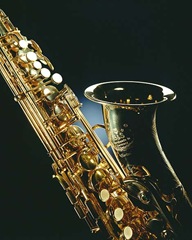 I wasn’t born a jazz fan, but I did form an instant “addiction” at age 13. How does that happen to some one?
So you heard some music you liked and were told it was jazz, and you wanted to hear more, and you did. Bang! You’re a jazz fan!
But that wasn’t the whole story. Many years later you wound up with a collection of thousands of albums by ten times that many musicians. And now you’re a serious jazz fan. “Back in the day”, that was a hit or miss proposition, but now there’s a mountain of resources to get you there. So here is the shortcut path.
First, there’s radio. Chances are your area doesn’t have much jazz radio on the FM band, although there are many full-time jazz stations around the world. Many colleges in the US support part-time jazz programming, and if you live near a college or university, that may be a resource. Fortunately, many of these stations are also on the Internet and you can find them from New York to Vladivostok and Tokyo and many cities in between, all in a day’s search (or less). My smart phone has an application called WunderRadio [sic] that can pick up in excess of 35,000 Internet stations (I have managed to bookmark 27 full-time jazz stations, without having to even look hard).
Unfortunately, fulltime jazz stations are usually listener supported and consequently have to appeal to the largest possible audience. As a result they tend to exclude almost all but the most widely popular music, which is not always the “best” in jazz.
If you truly want to broaden your interest, you must dig deeper. One example of true excellence is WKCR (www.wkcr.org Columbia University) that has had continuous jazz programming since the 1940’s (the oldest jazz station in America). Although they only broadcast jazz on a part-time basis, their programming covers the entire spectrum, and they run many specials where they sometimes focus on a single player for 24 hours straight or more. Their music is streamed over the Internet, and they also have archived music for your listening enjoyment.

Another good starting point, www.allaboutjazz.com describes itself as the web’s premier resource for jazz-they are, without question, the largest Internet site devoted entirely to the music. They publish news and reviews and conduct forums and include a streaming service. AllAboutJazz also publishes an excellent hard copy jazz newspaper that you can subscribe to for the cost of postage. Like WKCR, they believe in a full spectrum approach.
Internet jazz pages seem almost endless-and not just American music. Run searches for German Jazz, French jazz, Japanese jazz…-you’ll be amazed by how many countries you can come up with. Two of my favorites are Norway and Poland where jazz has really taken hold in a big way.
Many musicians and groups now have their own web page, and, if you develop any favorites, be sure to look them up. In some cases you will find samples of their music along with complete discographies of all the albums they have performed on.
You can also find tons of material on sub-genres of the music, all the way from Dixieland to free jazz and the avant garde…and, subjects you might think would be obscure, like who was the most famous bass clarinet player in jazz or what was The October Revolution of 1964. The answers to these and a myriad of other questions are usually covered in extreme and extraordinary detail.
There are also numerous discussion groups on the Internet devoted to jazz where you can meet other fans and musicians and chat about the music. Some of them can be quite informative, and you will also have a chance to ask knowledgeable people direct questions to broaden your understanding and interests. The largest and most active of these forums that I am aware of is on Amazon.com.

Want to read a book? You could start with Jazz For Dummies by Dirk Sutro

. Beyond that, there are history books galore and encyclopedias, some of which categorize the music by sub-genres with discographies bursting from every page. If you need an exercise program and you don’t mind weight-lifting, you might want to build a reference library.
Here are some books I have found useful over the years:

Even if you don’t read them, a collection like this will impress the hell out of any vagrant musicians who happen to be visiting you.
So, after all these years, what are the resources I use most? Well, for one thing, whenever I run across a new musician I particularly like, I check out the other members of his group to see what they’ve recorded. I also look into what other musicians they have previously played with.
My smart phone also has two Internet stations I find invaluable: LastFM and Pandora. With both of these you can create your own “stations” by feeding in the names of a few musicians you like. These websites then stream back to you music that is similar to that played by the musicians you selected, often introducing you to players you never heard of that match your taste perfectly! (Personally, I think that what appeals to me about jazz is that it expresses the entire range of human emotion-the good, the bad, and the ugly-on a truly grand scale.)
And last, but not least, there’s live jazz. I live near New York City so it’s easy for me to find entertainment that suits my tastes. I don’t travel much, but I still attend a festival occasionally where large groups of musicians get together to play-sometimes as long as a week or more at a time. Most large cities today have at least a club or two where live jazz can be heard. Some even have “house bands” that perform regularly.
Jazz musicians often find it difficult to make a living and many of them teach at local schools or take on individual students. In any case I feel these guys deserve whatever support I can give them. They have given me so much.
Oh, and in case you are wondering how a jazz musician can end up with a million dollars? The answer is, by starting out with ten million dollars.

This has been a guest post by Dan Bresnahan. Follow him on Twitter or Friendfeed and let him know if his article has helped you. You can also read and subscribe to his blog, Out to Lunch Jazz.
Posted by App at 1:12 PM 4 comments: