The Truth About the So-called "Obama Phone"

There is a story that right-wing nut jobs are circulating around that says that President Obama gave all black people a free cell phone, paid for with taxpayer money. It is based on a video of a black woman's claims that she got a free cell phone, so she is voting for Obama.

The problem with this story is that it just isn't true about the phones. The woman in the video is wrong about where those phones came from. And the right-wingers are wrong about how they are paid for.

So, what is the truth?

You know that extra charge on your phone bill that is marked "Federal Universal Service Fee", "Universal Service Fund" or "USF"? How long have you been paying that? Since before Obama became President? Do you know what that charge is for and who it goes to?

You have been paying into this fund since 1997. It is not a tax. The Telecommunications Act of 1996 mandated that all landline and cell phone service providers pay a portion of their profits into the Universal Service Fund to help ensure Universal Access to communications services to all citizens living within the US. Your greedy phone service provider chose to pass the cost of this along to you instead of paying it themselves.

Do you know how it is spent?

It was also spent to help provide communication and internet services to qualifying schools, hospitals, and libraries. Thanks to the Universal Service Fund, doctors at rural hospitals could now provide better care for their patients with video conferencing that could put them in touch with specialists at larger, more distant hospitals. People without computers could access the internet at their local library. And more technology in the classroom is always a good thing, especially in poorer school districts.

In 2008, under the Bush administration, they began using the fund to do more to help the poor obtain phone service that they might not otherwise be able to afford. That's what Universal Access means. It means everyone has access. This is done in 1 of 2 ways, depending on the person's situation.

In urban areas, which usually have good cell phone reception, a prepaid cell phone is given to a poor person. This is a cheap Tracfone, worth about $20 at most. The recipient of this phone is given between 60 and 250 prepaid minutes every month, depending on which state they live in. It has a maximum monthly value of about $10. They have to reapply every year and prove they are still poor and still need help obtaining phone service. If they run out of minutes, they have to buy one of those Tracfone prepaid cards with their own money or wait till the beginning of the following month when they get more free minutes. 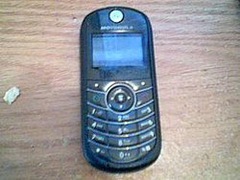 Most people that get a free phone receive a Motorola C139. It has no deluxe features. They are NOT given iPhones or any type of smart phone, nor are they given any type of deluxe "dumb phone" with features like camera, media player, or a full QWERTY keyboard. They are not provided with a data plan. They are not even given unlimited text messaging. They can not access the internet from their phone like you probably can do with yours. It's the cheapest, crappiest, most basic cell phone and service available. Are you still jealous? Would you trade in your current cell phone and service for this? Would you even trade in your current landline service for this?

Think about the average length of one of your phone calls. How long would 60 minutes last you? Think about how many text messages you send and receive every month. In some states, a person with one of these free phones can send and receive at most, 120 messages, provided they don't use any of their minutes for talking. And yes, they get charged for receiving messages, as well as sending. As far as voice calls, have you ever been put on hold? Being put on hold can very easily eat up all the free minutes given under this plan. In my state, if you apply for unemployment by phone, you can expect to be placed on hold for over 4 hours. You don't even get enough minutes under this plan, in any state, to cover that.

In areas without good cell phone reception or in certain cases like where the recipient might be disabled and/or require special phone equipment, poor people can receive up to a $10 credit on their phone bill, paid directly to the phone company, to make it cheaper for them to have landline phone service. This credit doesn't cover the entire cost of having basic phone service. The recipient would still end up having to pay something, and they would still have to provide their own equipment. Prior to the Bush administration, this was the only option that was available to the poor, to help cover the costs of phone service, and was available to all poor people, regardless of whether they lived in a rural or urban area.

You can not receive benefits under both plans. You can have either a cell phone or a landline credit, but not both. It is limited to one per household, and only to the head of the household. There is no family plan, you have to share the one cell phone (or landline) with all family members.

The federal government would prefer to give all low income households a cell phone instead of a credit on a landline, because providing cell phones actually goes farther towards ensuring Universal Access. Unfortunately, that isn't always possible and landline service is sometimes the only option. And sometimes, a family is so poor that even with a credit, they still can't afford landline service. This is another reason why they would prefer to give cell phones, when possible.

Why would the government help provide phone service to poor people?

Because these days, phone service is a necessity. We are not living in 1900. If you do not think it is a necessity, then I challenge you to give up both your landline and cell phone for six full months and rely only on pay phones whenever you want to make or receive a call. I bet some of you won't make it through one full day.

Or you can just do the following:

Imagine what your life would be like if you were too poor to afford a phone.

Imagine you or a family member, perhaps your child, being injured badly enough that someone would need to call for an ambulance. Or perhaps your or a neighbor's house is on fire, or maybe there is an intruder in your home. How are you going to call for help if you don't have a phone?

Imagine your child is at school and gets sick. How is the school nurse going to call you to tell you to come and get your child?

Imagine you are looking for a job. How likely will it be that you will be hired if you leave the phone number box blank, on an application?

What if you already have a job and you need to call in sick? Or perhaps someone else called in sick and your employer wants to call and ask you if you can fill in on your day off? Since you are poor, you could really use the extra money but since you don't have a phone, your employer will call someone else.

What if you are homeless and it is not possible for you to have landline service (not that you could afford it, any way)? Does that mean a phone is any less of a necessity to you? When was the last time you saw a pay phone? How about a working one? How about one that allows incoming calls?

Where did the idea for this free phone come from?

And as far as this being an "Obama phone", the woman in the video was mistaken. Like I stated earlier, this program began in 2008, under the Bush administration, so maybe technically it is a "Bush phone".  But the idea of providing low-income individuals with subsidized phone service originated in the Reagan administration. So maybe it's a "Reagan Phone". But then again, all of that evolved from ideas about universal access from as far back as the Wilson administration, so maybe it's really a "Wilson Phone".

And it is not given to all black people. Race has nothing to do with it. In fact, most of the poor people in this country that are receiving free or subsidized phone service, are white. Many are disabled. And many of them are elderly, having worked their entire lives for minimum wage and are now trying to live off a $600/month Social Security check. And you have to prove yearly, that you are too poor to afford phone service without help. So, black people that make too much money, don't get to have a free cell phone, just like whites that make too much money can't have one.

And there are a whole lot of people receiving subsidized phone service indirectly through the Universal Service Fund that are not even poor, but would be if they had to pay the proposed rates for rural phone service that the phone companies would like to charge.

Be sure to share this post with any right-wing nut jobs that you know, that are in need of an education. I'll be more than happy to set them straight.